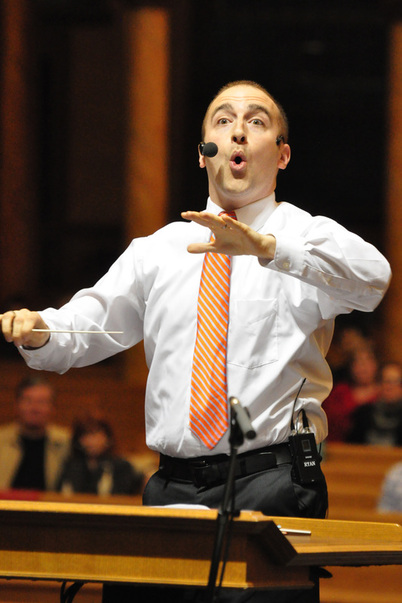 Hailed by critics for “spunky, vibrant and captivating” (Deseret Morning News, USA) performances with “unmatched sonorities and moving expressivity” (Der Rheinpfalz News, Germany), Dr. Justin W. Lewis is emerging as a conductor and arts administrator with a contagious passion for uniting people through music. Dr. Lewis is a conductor in the U.S. Air Force band program. Under his leadership, Air Force bands have given more than 2,000 performances in 61 countries for more than a billion people through radio and television broadcasts.

The Harrisburg Patriot News writes, "[his music] takes on a glorious voice. It is brooding and then jaunty and melancholy and then exuberant. Its range is so great that a listener wonders how it can be created...."

The Lehigh Valley's Morning Call writes, "Justin Lewis presented a superb program.  The concert provided such joy and pleasure that everyone must be looking forward to another. His music has charm and the aforementioned assets will be recognized in future aspirations and accomplishments."
​
Currently the commander of the United States Air Force Band of Mid-America, Scott Air Force Base, Illinois, Dr. Lewis leads 61 Airman-Musicians to perform over 300 events each year throughout the Midwest that honor America’s service members and veterans, inspire young people to serve, and connect the public with their Air and Space Forces. Dr. Lewis organizes, trains and equips the unit to communicate the Department of the Air Force’s strategic messages with Americans at home and strengthen international partnerships when deployed abroad. In 2021, content for the band's tv holiday specials was nominated for two regional Emmy® Awards.

Dr. Lewis commissioned as a distinguished graduate of U.S. Air Force Officer Training School in August 2012. He graduated summa cum laude with a bachelor of music from Temple University. He holds two masters of music from Penn State and a doctor of musical arts from the Catholic University of America. He completed post-doctoral studies at the Rotterdam Conservatorium at the University of the Arts in the Netherlands. He also studied choral conducting at Westminster Choir College's Choral Institute at Oxford, University of Oxford, England. Prior to his current position, Dr. Lewis was a team lead for opinion leader engagements and city outreach at the Secretary of the Air Force Office of Public Affairs at the Pentagon.
​
Dr. Lewis has recorded with the Naxos, Centaur, and Shadow Mountain Record labels. In 2018, he performed Alexander Kastalsky's Requiem for Fallen Brothers with the Cathedral Choral Society, the Clarion Choir, the Saint Tikhon Choir, the Kansas City Chorale, and the Orchestra of St. Luke's. The recording was nominated for a Grammy® Award for "Best Choral Performance." As music director of the Rheinland-Pfalz International Choir, Dr. Lewis prepared the choir to perform Brahms’ Ein Deutsches Requiem with the Sinfonieorchester des Landkreises Kaiserslautern, Haydn’s Lord Nelson Mass at the choir’s Carnegie Hall debut, and Vaughan Williams’ Dona Nobis Pacem and Santa Civitas at the Great Britain Choral Festival at Ely Cathedral near Cambridge, England. He also prepared the Virginia Voices for a performance of Carl Orff's Carmina Burana with the High Wycombe Choral Society in Buckinghamshire, England. ​

A frequent guest conductor and clinician, Dr. Lewis has led the Moldovan National Symphony,  the National Presidential Orchestra of Ukraine, the Ukraine National Philharmonic, Luxembourg’s Musique Militaire Grand-Ducale, the Doha Orchestra and Singers, the Afghan National Institute of Music, the Djiboutian National Music Institute, the Middle East South Asia Honor Band, the Virginia Choral Society, the Voices of Hampton Roads, the Tabernacle Choir and Orchestra at Temple Square. He has been invited to appear in concert with choirs, orchestras and bands in 19 countries. He frequently mentors young musicians as a festival guest conductor, clinician, and adjudicator.
​
As a cellist and vocalist, Dr. Lewis has performed under the batons of Christoph Eschenbach, Iván Fischer, Sir Christopher Hogwood, David Robertson, John Rutter, Gerard Schwarz, and Leonard Slatkin. Dr. Lewis lives in the St. Louis metro area with his wife, Jennifer, and their five children.​