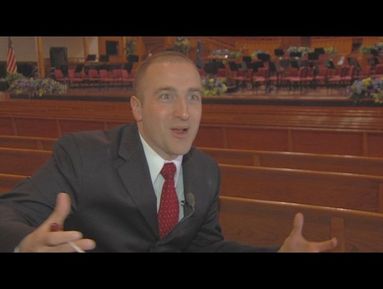 SALT LAKE CITY — The look on Justin Lewis' face said it all. Conducting the Mormon Tabernacle Choir — even once — was pure joy. "That was a rush," Lewis said. "It was an amazing experience. It was really neat to be in that position with all that surround sound." Last June, the choir invited fans across the country to enter the "Conduct the Choir" video Facebook contest. After many entries and 10,000, Justin Lewis, an Air Force flight commander, won the competition. "This is 360 people," he said. "I think that's a crazy number of people to have in a choir, but they do such a great job and they're all so in unison all the time. It's just really impressive how they keep it together and sing so beautifully." Following this morning's "Music and the Spoken Word" broadcast, Lewis took the stand. He has experience conducting an Air Force band but this was something all its own. Size and space really surprised him. "When you stand up there, you realize the back row of the choir is so far away," Lewis said. "And when you're listening to your cd of them, they all sound like they're right there. So, that was a little bit of a challenge." Justin Lewis entered basic training and could not perform with the choir last year. He returns to Pennsylvania Tuesday and his real job as associate conductor of the U.S. Air Force Heritage of America Band. Directing the choir was never on anybody's list, but it is now 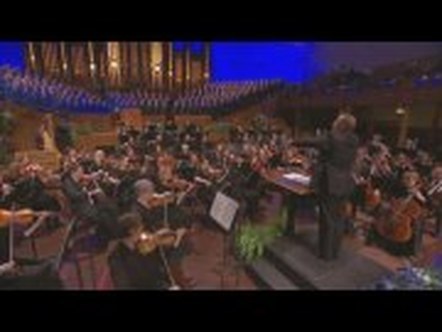 SALT LAKE CITY — A lifelong musician who won a contest redeemed his prize Sunday as he served as a guest conductor for the Mormon Tabernacle Choir during their Music and the Spoken Word program.

Justin Lewis won the contest with his video, which showed him conducting Beethoven’s famous “Ode to Joy” in various places around Washington D.C.

Lewis is a second lieutenant in the U.S. Air Force, and he is the associate conductor of the USAF Heritage of America Band.

Lewis said the tabernacle choir has always been a big part of his life, and their music has helped him. He said conducting the choir was a magical experience for him.

“It felt like a dream,” he said. “I felt like I was Mickey Mouse in ‘Fantasia.’ There’s all these wonderful musicians everywhere, and they’re so responsive and so kind, in addition to being great musicians.”

Lewis said he found out he had won the competition while he was in the midst of officer training, which he said served as a timely pick-me-up.

“I was in my first week of basic officer training,” he said. “It’s a pretty intense week for the Air Force. A Lot of push ups, a lot of running, a lot of other stuff from training instructors, so I could use a little good news that week. So to find out that I had this great opportunity to come out here and have the choir and Deseret Book bring me out was really exciting and really helped me get through officer training.”

Lewis said he relished the experience while he had the chance, and he is grateful for the opportunity.

““This has been an awesome opportunity that I’ll remember forever,” he said. “It’s sort of like driving a race car: You can’t afford it, you just enjoy it while you’re test driving it.”

Soldier Comes Out on Top in Choir Conducting Contest 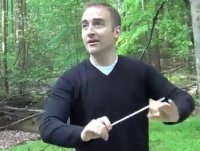 Take a bow Justin Lewis – and the real performance is still yet to happen. He has been chosen to stand before the Choir, all 360 members, and conduct part of a rehearsal later this year.

Lewis and a host of other would-be conductors of the Mormon Tabernacle Choir recently participated in a contest on the Choir’s Facebook page. “This was a first for the Choir and a once-in-a lifetime opportunity for a fan,” said Mack Wilberg, Choir music director who judged the videos. Applicants posted videos of themselves on YouTube conducting Beethoven’s famous “Ode to Joy” from the Choir’s recent album Glory! Music of Rejoicing. Finalists were selected and Wilberg chose the winner.

Fans, friends and family members voted on the Web for the first stage of the contest. The ten finalists with the highest vote tallies were judged on three criteria to determine the winner: votes, conducting skill and creativity displayed in the video production. Justin Lewis, currently attending Air Force Officer’s Training School, came out on top.

His video shows him conducting in a forest, on city streets and in front of a battleship—all in Washington D.C. One fan congratulated him on Facebook for his “clean conducting and passion.” A member of his local church congregation noted, “Justin has moved us to tears many times” with his singing, cello playing and conducting of the local church choir.

Lewis hopes to become an Air Force band director and says the Mormon Tabernacle Choir has played a big role in his life. “Their music has gotten me through a lot,” he said. 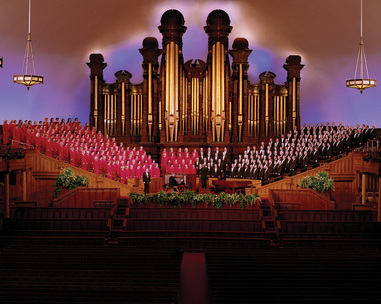 SALT LAKE CITY – Earlier this year, the Mormon Tabernacle Choir announced a search for a guest conductor. They’ve now selected the winner from among applicants who sent in video auditions.

Applicants submitted videos of themselves conducting Beethoven’s famous “Ode to Joy.” Finalists were selected and choir members chose the winner.

Some contenders showed off their skills in the rain, in the woods, in dreams and other unusual situations.

But it was Justin Lewis who caught the choir’s eyes. His “Ode to Joy” took him from city streets to battleships.

“We just went to a lot of places around Washington D.C. and tried to make sure there were no people around to laugh at me,” said Lewis.

Lewis just entered basic training at Maxwell Air Force Base in Alabama. He plans on becoming an Air Force band director and says the Mormon Tabernacle Choir has played a big role in his life.

“I’m super excited. The Mormon Tabernacle Choir has been a big part of my life, their music has gotten me through a lot,” he said.

Lewis says he first started conducting as a small child; he used to pick up a stick and pretend to play along at outdoor concerts.

“I would take it and turn it into a baton. So I’ve been play conducting for a really long time now,” said Lewis.

The father of two even met his wife through music.

“We met at orchestra camp a long time ago. I’m a cellist and she’s a violist. I sat right next to her. I was smitten. She wasn’t very interested in me but I worked on that,” he said.

Lewis says he’s very excited to lead the world-famous choir. There hasn’t been a date set for his conducting experience yet, but the choir has agreed to work with his military commitments. He hopes to set a date this fall. 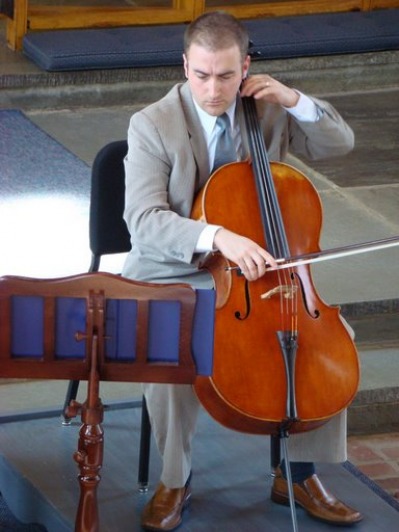 March 3oth- Last Friday night the walls of Esber Recital Hall resonated with sounds of nine different graduate student performances. All performers were evaluated by a panel of guest judges who were picked from the local community. After a quick deliberation break, the top three were announced.

Justin Wayne Lewis, a graduate student in cello performance and orchestral conducting, received the first place and won the graduate school award for his performance of David Popper's Hungarian Rhapsody. 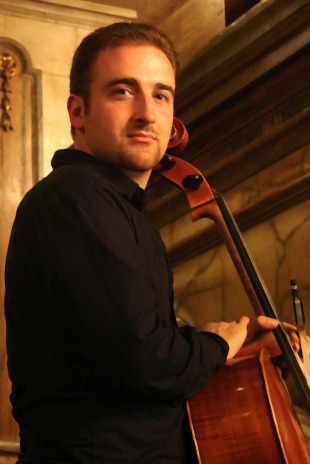 WHAT: "Warm Up with a Cello"
WHEN: 8 p.m. Saturday
WHERE: Whitaker Center, 222 Market St., Harrisburg
OF NOTE: Local cellist Justin Lewis joins the Central Pennsylvania Symphony Orchestra in a performance of Anton Dvorak's "Cello Concerto in B minor" as he embarks on his professional career.

Lewis performed the concerto last year with the Penn State Philharmonic Orchestra. "A couple years ago, I made a list of goals, and playing this concerto with an orchestra was on there," he said.

CPSO's program at Whitaker also will include "Children's Corner" and "Clair de Lune" by Claude Debussy, and "Wind Serenade" by Richard Strauss. The 60-member community orchestra is conducted by Gregory Woodbridge. 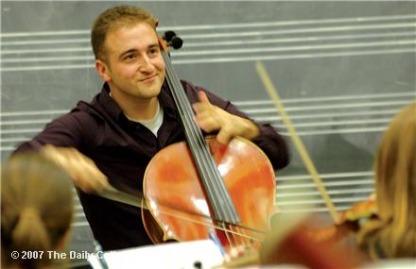 Music enthusiasts will be privy to witness a Penn State cellist achieve a lifelong goal this Sunday evening.

Justin Lewis (graduate-cello performance and orchestral conducting), accompanied by the Penn State Philharmonic Orchestra, will entertain the audience with Dvorák's Cello Concerto in B Minor at 8 p.m. in the Eisenhower Auditorium.

With two professional musicians as parents, Lewis picked up a cello at the age of three, and has not put it down since.

"A couple years ago, I made a list of goals, and playing this concerto with an orchestra was on there," he said.

Gerardo Edelstein, the director of the Penn State Philharmonic Orchestra, said Lewis was selected by faculty members in the annual "concerto competition" to play his solo with the orchestra.

Edelstein said the selection decision is based on musicianship, quality and preparation, among other things.

"[Lewis] has a beautiful sound from his cello and excellent technique," Edelstein said.

Lewis said he chose Dvorák's concerto because it is often referred to as "the king of cello concertos."

Believing for much of his life that a concerto couldn't be written for a cello, Dvorák finally decided to compose one after coming to the United States. He created one of the most well known concertos for any instrument, Lewis said.
Comparing playing Dvorák's piece to running a marathon, Lewis said the music is technically challenging throughout the entire piece.

"I'm going to be nervous, but after a while, you just have to relax and have fun," he said.

Lewis, who has been preparing for the performance since January, said he feels an audience knows when a musician is not enjoying himself.